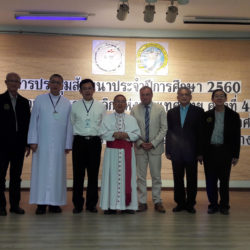 At the invitation of Father François-Xavier Decha Arpornratana, General Secretary of the CECT, we were able to participate in this meeting, which was held from August 20th to 23rd in Pattaya. The theme of the Conference was “New horizons for Catholic education in Thailand.” Almost 500 people (priests, nuns, schools administrators, teachers) took part in this Conference, under the Presidency of Monsignor Louis[…]