At the invitation of the Global Pedagogical Network (GPEN), which brings together the Protestant schools of the world, the Secretary General traveled to Arusha (Tanzania) to participate in the third international meeting of this emerging movement. At this meeting, the Secretary General of the OIEC presented the OIEC network and the main lines of its action. He particularly emphasized the importance of the representation of Catholic schools in international organizations, and the necessary contribution of Catholic schools to the Education 2030 and the SDG4 project. During discussions with GPEN officials, several topics which Catholic and Protestant schools have in common emerged. It has been proposed to strengthen cooperation between Catholic and Protestant schools in dealing with these issues: education for peace, justice, solidarity, sustainable development, access to education for the poorest, inclusive education, etc. 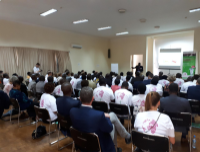